My AV performance is an ongoing exploration of the representation of every movement in the musical Improvisation in visual form. Whenever any part of the music is altered, be that FX, mixer fades, start/stopping of track stems, playing of instruments etc. the visuals respond accordingly….

Before christmas I Gave a Performance at Goldsmiths University in London as part of the Besides the Screen festival organised by Exploding Cinema on 1st December. This is essentially the set i gave. More to follow… I used a modified version of the glitch factory…

Since my earlier post about audio visual preparations it’s been a busy year, and i have been honing my skills as an AV performer, tweaking the live setup, bringing in some new technology and generally having a ball. Along the way I’ve met some great people who I’ve formed a loose collective with called Freecode. So, leaving off from my first solo performance at Soundkitchen in May, I was asked to put on an event with the Eastside Green social space erected by the EXYZT architecture collective, during the Fierce Festival. During the festival which was twinned with the Flatpack film festival, I went to see an inspiring event, the Pixel Visions film screening of early computer generated animation a la John Whitney, and a performance by Audio Visual collaborators SCREE – DJ Sir Real and VJ Catweasel. I started talking to Antonio Roberts aka Hellocatfood

about the more programmed side of AV – e.g. node based software like max/msp and puredataused to generate sound and light either simultaneously or at least more purposefully… Got to thinking how little of a platform there was for this sort of event. In Birmingham or otherwise from what I’ve seen. When the opportunity to organise something for the EXYZT site i immediately thought how cool it would be to get some of us together for an event. Obviously Hellocatfood was on the cards and Minuek (Jim Warrier)

An example of Minuek’s stuff – click for his tumblr

END_OF_DOCUMENT_TOKEN_TO_BE_REPLACED 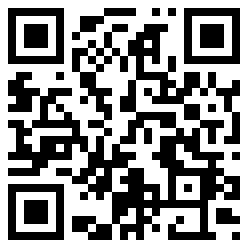 My first solo performance in Birmingham was at the SOUNDkitchen – http://soundkitchenuk.org/ – at the Hare and Hounds music venue in Kings Heath on 9th May 2011. Vodpod videos no longer available.

Pages, the bits wot appear at the top of a wordpress blog permanently, sometimes as menus. I’ve updated the Music, Video and Art pages at the top. I’ll add pages in the next couple of weeks for my regular nights, but before that i’ll start posting again… in the meantime please enjoy.

Part 1 of my DJ/VJ mix for some tunes that go really well together. Mixed using Traktor Pro and Modul8 on the same MacBook Pro.

I have made a cool little mix of some nice tunes, with a DJ/VJ video mix of this to follow. Some gems in there, it all started with the Do It To The Funk track, from Credit to the Edit by Greg Wilson, a mashup he made of the two tunes, “Do It To The Music” by Raw Silk over an instrumental edit of DMX Krew’s “Who Got The Funk”. The rest just followed and i got into a bit of post dubstep type stuff; Floating Points and Dam Funk as well as some classic Salsoul and some 80s synth pop. enjoy:

All mixed and recorded on Traktor Pro, I didn’t have my Xponent controller with me when i recorded it so just using the mouse, it came out ok.

The Fierce Festival is Birmingham’s festival of the performing arts (essentially) and was started in 1997 by Mark Ball. Since then it has had an immense impact on Birmingham’s culture and has gained a reputation for edgy, underground and sometimes tongue in cheek presentation of the finest in contemporary art. The company Fierce Earth has grown and moved on from the festival alone. The festival is currently reinventing itself and experimenting with new directions under the artistic directorship of Laura McDermott and Harun Morrison who took over in 2009. One of the main things I’d say they bring to the mix is a totally open mind and no agenda. They are not from the Midlands and as such are gazing on the landscape like explorers, learning as they go, taking their time to learn the ways of the people. Having had two ‘interrobang’ events away from Birmingham (one in Warwick Arts Centre and one in Wednesbury at The Old Post Office and the Town Hall), i think the best thing is to expect the unexpected, which has always been the way of Fierce.

I have been a fan of the festival since before I considered myself an artist and along with Vivid, Fierce had a lot to do with me getting involved in the arts. I volunteered as early as 2004 to help out with the festival and was employed by Mark Ball on a few occasions. I also met some good friends whilst being involved. People like Rich Bate and Anne-Marie Pope, who were involved in the organisation of the festival. Meeting ‘the pope’ was also the beginnings of my involvement in the Project X Presents series of events.

So when the opportunity came up to apply for the Platinum artist development program i gave it some thought, submitted and Harun and Laura chose me, I’m very pleased to say. The aims of the program:

Platinum is an exciting opportunity for artists to develop their work with Fierce Festival.

Platinum provides a space to network & make connections with key internationally acclaimed artists to focus & develop your own work in a supportive environment.

Fierce has a reputation for celebrating risk and for encouraging the expression of a myriad of voices, perspectives and artforms.

Fierce is particularly interested in its curatorial agenda being led by the artists it engages with. Forthcoming Fierce festivals will involve 8 – 12 artists who develop their projects over a ten-month period. This emphasis on process is very much at the heart of the thinking around Platinum. We are less interested in finished products than the development of long-term strategies to sustain your career as an artist. Platinum artists are very much a part of the activities and enquiries of the festival itself.

So even if i don’t come up with something at the end i have achieved something. Seems I can’t lose. I do feel obliged, however (if only to myself) to create new work from this and have decided to come back to where I started creatively as a youth, and have been creating some music, with the aim of performing a fully live Audio Visual set of my own creation from beginning to end, using found footage, my photography and animation, field recordings, and live performance.

The program started last April and through Laura and Harun’s zen-like guidance I have been developing my ideas, and communicated them to the other artists on the program. Mentoring of the group discussions has been by performance artist Kira O’Reilly, who is extremely inspiring and perfect for facilitating the group. For instance on the first day we met, she instigated, not an icebreaking waffle fest of artists spouting about themselves (I know I do) but a silent walk around the surrounding streets where each member took turns to lead. We learnt as much about each other in that hour than if we’d talked for three.

Each artist has a budget for the program, two-thirds of which can be spent on kit. The remaining portion to be spent on exploring, e.g. courses, travelling to festivals, and mentors of the artists choice. I decided i would like to talk to AV legends Coldcut (why keep it mortal?), mentioned this to Laura and she got someone from Ninjatune to contact me a couple of weeks later! I’m about to arrange a meeting with Matt Black, so I’ll report back when I have done.

END_OF_DOCUMENT_TOKEN_TO_BE_REPLACED

Last year Chromatouch had the honour of being contacted by Rickey Ainsworth at Grand Rapids Michigan Roger B. Chaffee Planetarium and asked to show the fulldome film Written on the Body in Michigan’s ArtPrize festival.

ArtPrize is an international art competition held in Grand Rapids, Michigan. The first exhibition took place between September 23 and October 10, 2009, and the 2010 exhibition was open from September 22 until October 10. ArtPrize is unusual both for the large size of the top prize ($250,000, combined with other prizes cummulatively amounting to half a million dollars), as well as for the method of judging entries. There is no juror. The artists negotiate a venue with local exhibitors, and the works are voted on by the public using modern networking technology.

Rickey, being a follower of the Birmingham Thinktank Planetarium‘s highly entertaining Facebook page got in touch with Mario DiMaggio there, saying

I’ve long been a fan of what I’ve seen of Trimble & Wetton’s “Written on the Body,” shown not too long ago at your institution. Do you think they’d be willing to re-exhibit their work at another planetarium?

Well of course we agreed, the only problem was that the original footage had been lost due to hard drive corruption, so the fulldome, six channel, Digistar 3 format had to be reverse engineered into the original single frame Dome Masters ready to be re-rendered into the Digistar 4 format for the system they hired in especially for the festival. Thanks to Mario very kindly upgrading his software and passing it on to his team of highly trained assistants, it was possible to do this, and the thing was copied to a hard drive and ready to send… 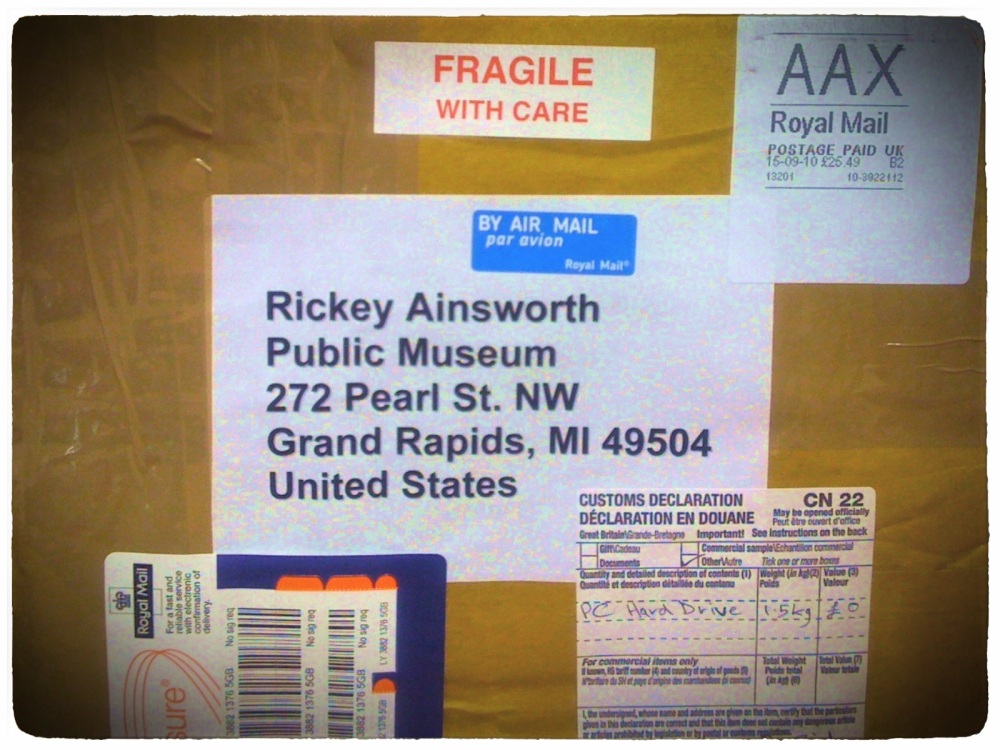 Hard drive all packed up and ready to go...

It took a while to get through customs but arrived just in time for the festival and it was shown alongside two other fulldome films by Scott Hessel and also Paul Grimmer that Mario suggested would fit the bill.

Unfortunately I didn’t have the chance to get out to the festival but it sounded amazing, with the whole city turning into a gallery for two weeks! In Paul’s words:

During the three weeks of ArtPrize, our venue at the Grand Rapids Public Museum attracted over 241,000 visitors, more than we typically get over the course of an entire year. Likewise, we set records in the planetarium with over 65,000 visitors (which would be a just-below-average annual attendance for us), all there to see three video installations, including yours, projected by truly state-of-the-art planetarium technology. We couldn’t have done it without your participation. Thank you for all the effort you put into to creating (and restitching) Written on the Body, and for giving us the opportunity to share your work in such a unique way.

One of the highlights for me–aside from the art itself–was the ArtCation program, which gave roughly 2,000 area students the chance to experience your work and think about the intersection of art and technology in new ways.

So all in all a highly successful venture, international exposure along with a chance to hopefully show my next fulldome film this year and visit the festival…